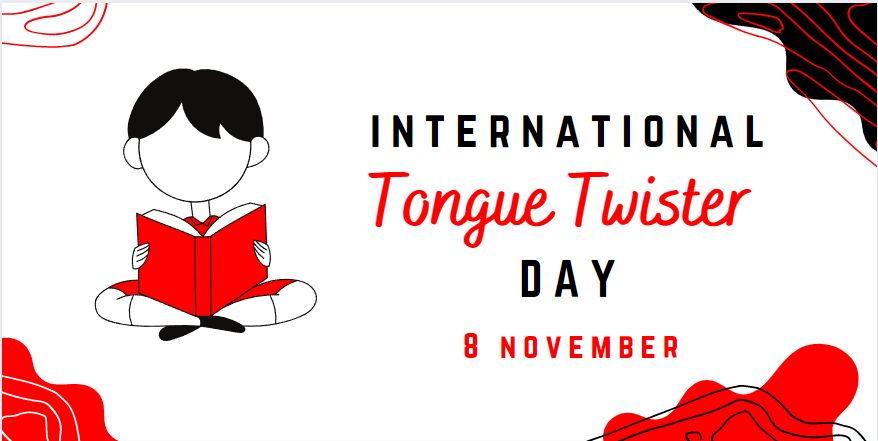 Yep, that’s right! There’s an entire day dedicated to those catchy phrases that tie us in knots. But what exactly is a tongue twister? Why and how did they begin? What makes them so hard to pronounce in the first place?

We created this breakdown to help answer these questions!

When did the phrase first appear?

The earliest known mention of the word “tongue twister” is in 1875. “Tongue twister” was used to describe words and phrases that felt awkward to repeat aloud. By 1892, the definition expanded to encompass phrases that were deliberately concocted to be difficult to improve diction and pronunciation in speakers.

Today, tongue twisters are still regularly used as a strategy to warm up for any public speaking endeavour. Whether you’re an actor, news presenter, or have an upcoming presentation to deliver, no one wants to be caught tongue-tied!

Blundering over hard-to-pronounce phrases makes for a great round of laughter! But this isn’t the reason tongue twisters were originally developed. Tongue twisters are like physical exercise, but for our speech. The more you do them, the better you get. They’re a great tool for speech therapy and overall speech improvement because they force us to fully enunciate each word and syllable. Training ourselves to enunciate each word and syllable fosters greater clarity, helping us to concentrate on how we’re speaking rather than what we’re saying. Speaking with impeccable clarity remains a useful skill because it helps us to effectively deliver a message.

Arguably, the most famous tongue twister, “she sells seashells by the seashore”, can be traced back to 19th century England. The tongue twister is allegedly about a woman named Mary Anning, born in 1799 in Dorset, England. Mary was a collector of shells and fossils. She sold her findings to wealthy families so she could support her family. Mary was a poet’s muse for a reason. She and her brother discovered the skull of a four-foot “Ichthyosaur” at the age of 12! This was before Darwin’s Theory of Evolution. Her findings definitely created quite a stir in the scientific community! They were some of the earliest signs of animal extinction.

Remember Peter Piper and “a peck of pickled peppers”? This tongue twister is believed to be based on a French botanist and horticulturalist called Pierre Poivre. Pierre was born in 1719 in Lyon, France. During his lifetime, spices were known as “peppers.” The pepper supply was carried out by trade companies who used lime seeds to pickle the peppers because lime seeds prevented them from germinating. The peppers were deliberately pickled so that those who bought them could not reproduce the spices on their own, leaving others dependent on the established suppliers, which bolstered the demand for peppers. Wow, now we’re almost getting tongue-tied with the number of times we’ve had to say “pepper’!

Pierre got around this by stealing the spices from the store (before they had been pickled) and planting the seeds in his garden. This allowed him to resell peppers at a more affordable rate. Does this make him a hero? Or a villain? We’ll let you decide!

“How much wood would a woodchuck chuck if a woodchuck could chuck wood?” Have you ever seen a woodchuck chuck wood? Many brave soldiers have attempted to slay the mystery that surrounds this question! Jokes aside, this popular tongue twister comes from the hook in the “woodchuck song”. Written by Robert Hobart Davis in 1902, this song first appeared in the hit musical comedy “The Runaways”.

Tongue twisters play upon alliteration, unusual word composition, and sound repetition. Whether you’re a native speaker or someone learning another language, tongue twisters require a high level of concentration. Scientists have found that there are many parts of the brain that work together to control speech production. Our brains become confused when they hear similar-sounding syllables and odd word groupings. So, if one part of our brain is affected by this confusion, our speech quickly becomes compromised and convoluted.

Want to test your speech? We have a little gift for you!

Here’s a round-up of our favourite tongue twisters:

Phew! How did you go with these tongue twisters? Did you erupt into unintelligible spluttering? Or, are you a tongue-twister master who’s hungry for more?

For those who can’t get enough of tongue twisters, hold on tight. Here’s what’s commonly thought of as the most difficult!

According to a team of researchers from the Massachusetts Institute of Technology (MIT), people who repeated this phrase 10 times “clammed up and stopped talking altogether.” The point of this 2013 study was to learn more about the human brain’s speech planning process. We think it’s safe to say that they’ve found a soft spot!

As communication enthusiasts, the Elite Words team love the history behind tongue twisters but try to avoid them at all costs! We always want our writing to be read with confidence and clarity. Tongue twisters are definitely not easy to read or say!

Contact us today to find out how we can help you get your message out clearly!